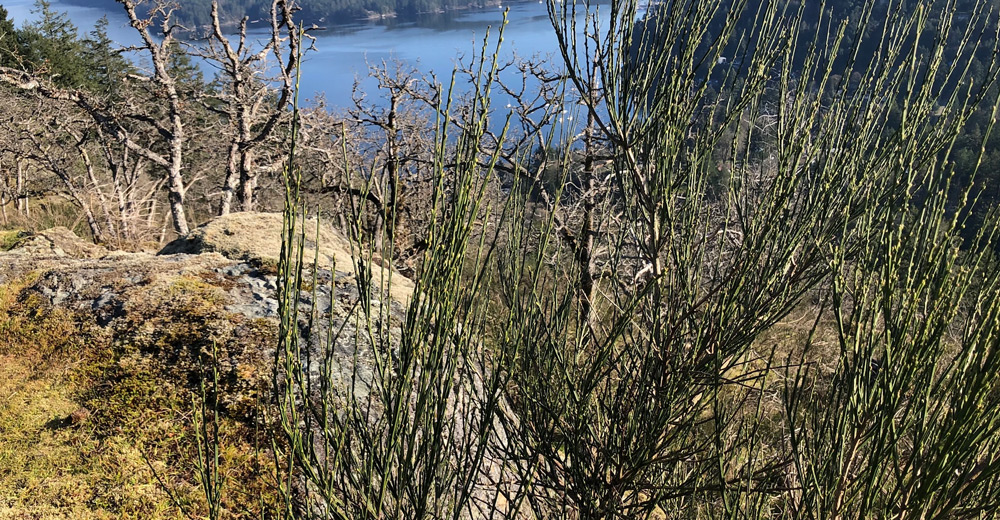 Scotch broom is the scourge of North Cowichan, a tough invasive species that crowds out native plants — including endangered Garry Oak ecosystems — in the Municipal Forest Reserve/Six Mountains and creates a serious fire hazard.

The best way to combat the plant is to maintain a canopy of trees, since broom is intolerant to shade.

He tells sixmountains.ca that broom creates a fire threat along cleared areas such as highway corridors and right-of-ways, including for hydro lines and gas pipelines, as well as in open meadows and grasslands.

“It will allow fire to spread more readily,” he said.

Gorse, another invasive species, working its way up the island, is also a fire threat.

“I have dealt with both broom and gorse and I can tell you that they reach coverage levels that will become a surface fire hazard,” Blackwell said. “Typically, these hazards are expensive to manage and not always effective.”

“The saving grace is that it is shade intolerant. So, under a canopy of trees broom loses.”

The company’s primary strategy is to sanitize equipment between moves and reforest quickly to get the seedlings above broom as soon as possible, he said. “When that doesn’t work, we do resort to manually applied low concentrations” of the herbicide glyphosate, he added.

Glyphosate also kills grass and other vegetation. Broom seeds hidden in the soil can germinate after application. It must not be applied near water sources or in poor weather.

Occasionally, manual brushing of broom is also done with saws.

Right-of-ways and highway corridors typically exclude trees that might stop the spread of broom, and pesticides are often not an acceptable option near communities.

Scotch broom was brought to Vancouver Island in 1850.

Regular cutting of the plant can help to arrest its spread, but won’t eliminate the problem.  Broom seeds in the ground can last for decades. The garden ornamental invades exposed, well-drained mineral soil.

Broombusters (broombusters.org), a Vancouver Island volunteer organization working to contain the spread of broom, recommends cutting at ground level while broom is in bloom in spring. It advises not to pull broom; the seeds sprout in the sun and thrive in disturbed soil.

“Keep the ground cover, grass and trees,” the group says. “Just cut, pat down the soil and cover with the ground cover. Smile and move on. Replant grass or other plants when possible.”

According to the Invasive Species Council of B.C., broom is concentrated on southern Vancouver Island, but has been reported as far away as Haida Gwaii. An Oregon study in 2014 estimated the economic impact from the invasive plant at almost $40 million US annually in the state. One plant can produce thousands of seeds. It is also an allergy source.

“Hand pulling may encourage broom growth due to the high level of soil disturbance,” the council confirms. “If pulling will result in soil disturbance, plants can be cut as close to the ground as possible.”

The council describes gorse as a spiny shrub from the Mediterranean region of Western Europe that thrives on sunny clearings.

It was first introduced as an ornamental in south coastal Oregon in the late 19th century, and has since spread widely in coastal areas from California to B.C.

“It’s starting to become more of an issue,” says Blackwell. “It burns like kerosene.” The plant also causes problems for people with allergies.

A municipal consultation process into future management of the Six Mountains has been suspended for 90 days due to the coronavirus.

Endangered landscape at further risk because of North Cowichan logging
Back to the Future
The Unseen Forest Video
Call to action: Fill out the North Cowichan Vision & priorities Survey NOW! (Deadline September. 15)