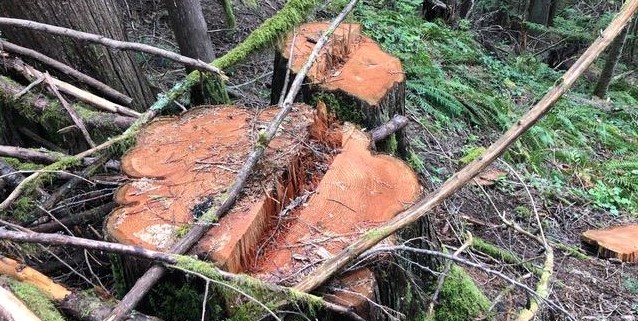 North Cowichan’s municipal forester is recommending a series of stiffer penalties to combat a rash of tree poaching in the 5,000-hectare Municipal Forest Reserve.

Shaun Mason’s proposals — to be debated at council’s June 8 Committee of the Whole meeting — reflect the fact that the current system of fines provides little or no deterrent to poaching and does not reflect the value of trees being stolen.

The current fine under the Forest Use Bylaw for removal of wood without a permit is $200, reduced to $100 for early payment.

Less than two months ago, on April 19, sixmountains.ca discovered the poaching of two valuable western red cedars on Stoney Hill and all-terrain vehicle tracks leading to an apparent getaway about a kilometre away on Stoney Hill Road.

Since then, sixmountains.ca has discovered numerous other cedars as well as Douglas firs stolen from the forest reserve on Mount Prevost and Mount Sicker.

North Cowichan became aware of the problem earlier this year, and suggested Douglas firs were being removed for firewood. But that’s not the case with the larger cedars, the theft of which could be linked to high wood and lumber prices.

In a report to next week’s meeting, Mason writes that fines associated with violations of the Forest Use Bylaw “need a review to better align” amounts with the severity of the offence. “Increasing the fines and streamlining the process will help act as a deterrent to illegal activity that has been taking place within the MFR.”

Mason is recommending the following:

(1) Add the following clause to the Forest Use Bylaw: A person who contravenes a provision of the bylaw is liable, on summary conviction, to a maximum penalty of $50,000 under the Offence Act and the costs of prosecution. Where an offence is continuing, each day would be a separate offence. Proceeding under this scenario would involve taking the accused to court, a more complicated process. Currently, unless specified in a bylaw, the maximum fine on conviction is $2,000.

(2) Under the Bylaw Offence Notice Enforcement Bylaw, increase forest-related fines to up to $500, which compares with the current $100 to $300.

(3) Under the Municipal Ticket Information System Bylaw, increase the fines associated with forest violations to up to $1,000, which compares with the current $100 to $500.