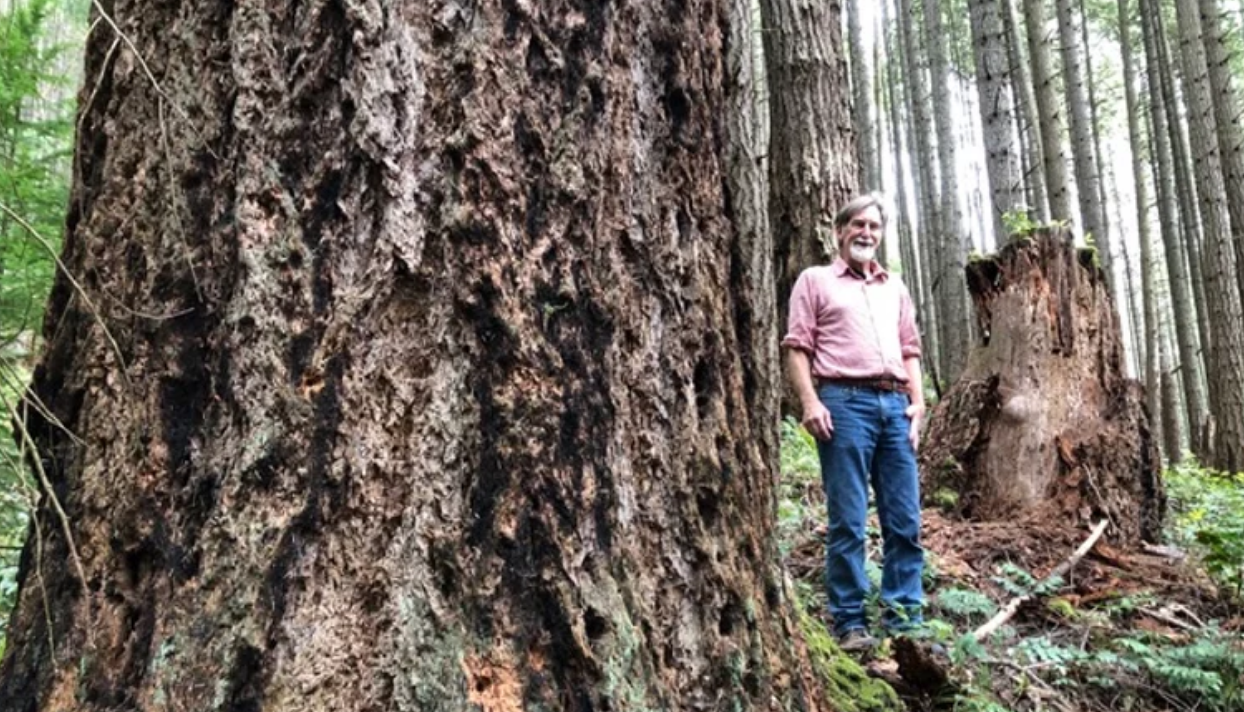 Tucked away on the steep and remote slopes of Little Sicker Mountain lies the last old forest in North Cowichan’s Municipal Forest Reserve.

Towering Douglas-fir trees reach for the sky near Bonsall Creek, an area that is home to black bears and Roosevelt elk but remains largely unknown to municipal residents.

sixmountains.ca explored the forest this week accompanied by Bruce Coates, co-chair of Cowichan Valley Naturalists’ Society and a member of North Cowichan’s Environmental Advisory Committee, as well as Tom Bailey, a construction worker and outdoor enthusiast who lives near the base of Sicker and frequently walks in the forest.

The visit entailed bushwhacking, scrambling over steep ground, and following portions of a seldom-used mountain bike track close by.

The exact age of the forest remains to be determined. An “old-growth” tree is generally considered to be 250 years old. By one timber company’s estimate, the largest firs in the Bonsall Creek forest are likely 150 to 200 years old, based on our measurement.

“These forests are incredibly special to me,” Bailey said. “It’s these type of trees…that we’re trying to protect.…To the best of our knowledge, these are the oldest and largest trees in the Six Mountains area.”

There is a moratorium on municipal logging in the reserve pending a public consultation process — stalled now for more than a year while closed talks with local First Nations continue. (https://www.sixmountains.ca/north-cowichan-deadlock-means-publi)

Tree poaching has surfaced as a problem in the forest reserve recently, however the old forest near Bonsall Creek would seem safe thanks to difficult access.

The University of BC forestry department has told North Cowichan it stands to earn as much or more through the sale of carbon credits than logging.

Finding the Bonsall Creek old forest was aided by LIDAR (Light Detection and Ranging) mapping. The remote sensing technology uses light in the form of a pulsed laser to measure distances, including from the forest floor to tree tops.

Andy MacKinnon, a retired provincial forest research ecologist and the author of the Plants of Coastal British Columbia, has told sixmountains.ca that this zone has the second least amount of old-growth forest in the province and the second highest percentage of private land, after the coastal Douglas-fir zone.

Conservation of both zones is critical, he said.