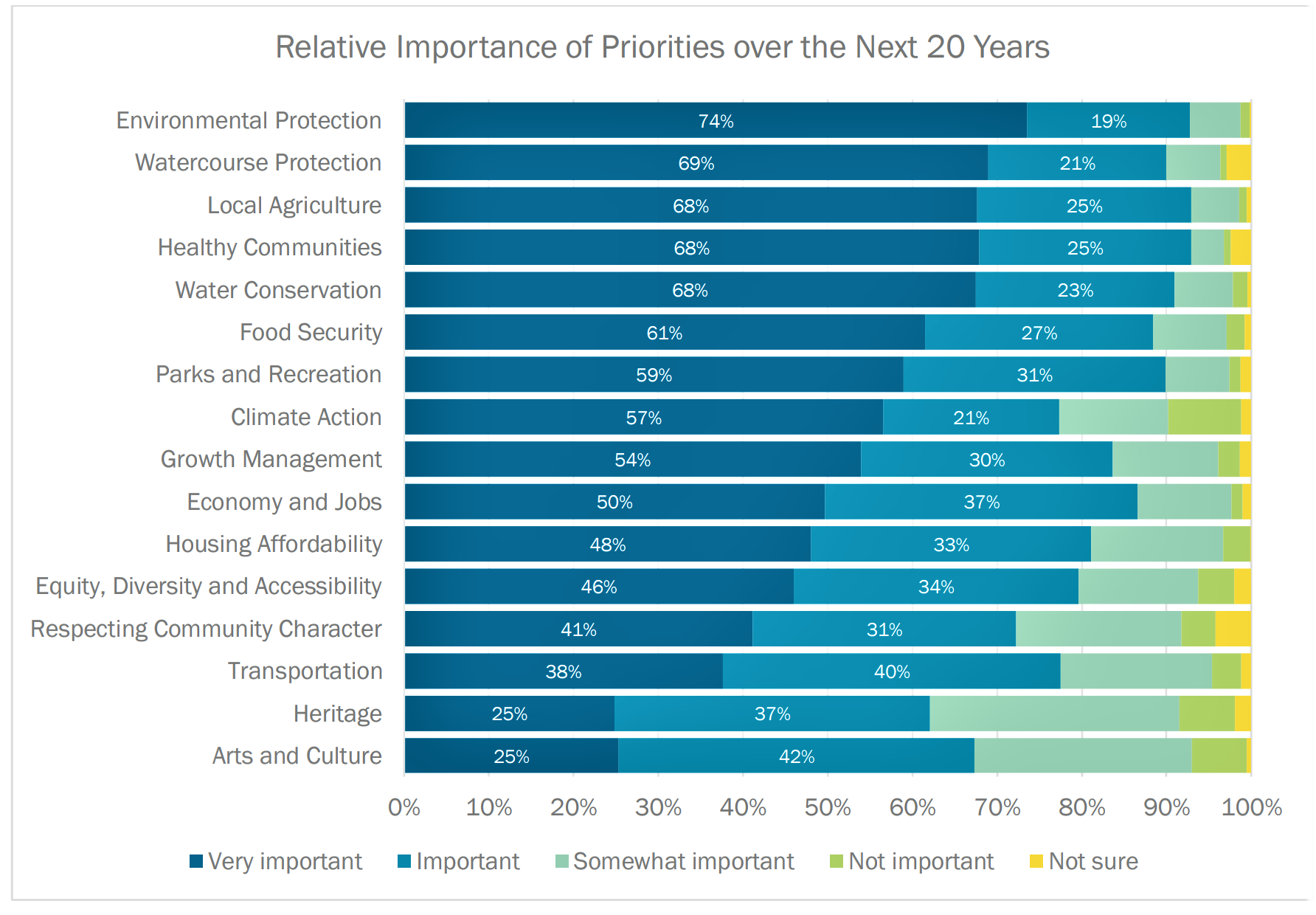 The public has identified green spaces and recreation as easily the most important attributes of North Cowichan, according to a survey designed to guide the municipality over the next 20 years.

A report by the consultant, MODUS, says that 1,201 individuals participated in the “vision and goals survey,” part of the municipality’s renewal of its Official Community Plan. The survey was mostly completed on-line from August 14 to September 17.

Referring to an overarching theme in the responses, MODUS concludes: “The preservation of natural areas and resources was the most frequently mentioned topic.

“This relates to protecting wildlife habitats, limiting extraction of natural resources and implementing strategies to mitigate the impacts of climate change.”

Asked what they love most about North Cowichan, a total of 624 individuals named “natural green spaces and surroundings, specifically the mountains, rivers, forests and ocean.” Another 304 identified “access to outdoors for recreational activities such as hiking, biking, kayaking and swimming.”

Asked what they’d change about the municipality, 197 people — again, more than any other category — addressed the theme of “environmental protection and preservation,” according to the report. The public expressed concern for the “conservation of natural resources and preservation of forest and green spaces, specifically related to the negative impacts of logging and air pollution.”

In second spot, 192 people addressed the theme of “growth management and development.” They said they want less urban sprawl and a slower rate of development, citing “concern for uncontrolled development that will negatively impact natural areas/resources and may take away from the semi-rural character.”

The survey results send a clear message to council on citizens’ vision for the future.

“This feedback will help shape a 20-year vision and develop priorities so we can achieve that vision together,” the MODUS report explains. “Coming to a common understanding about our collective community values will help us ‘ThinkForward’ as we move through this community-driven process.”

Mayor Al Siebring has stated: “Hearing from our citizens and the community is vital to getting this plan right. We want to ensure that the community’s voice and vision are reflected in the updated Official Community Plan, and this is a key moment.

“This survey is your chance to express your biggest hopes for the future of our municipality, and I strongly encourage you to participate.”

The development of a new Official Community Plan is separate from consultations on the future of 5,000-hectare Municipal Forest Reserve. Council has suspended public engagement on the forest reserve pending more closed talks with local First Nations.

In response to the report, Icel Dobell of the forest-advocacy group, Where Do We Stand (wheredowestand.ca) said the overwhelming public support for forest preservation should be reflected not just in the Official Community Plan, but in the forest review as well as the municipal Climate Action and Energy Plan.

“North Cowichan now has the community’s input,” Dobell says. "Let’s see how they listen to the public."

The survey results confirm the public’s support for a conservation vision — not continued logging — in the forest reserve and emphasize the need to preserve our forests for nature, people and our climate.

The MODUS report will be discussed by the Official Community Plan advisory group on Wed., Oct. 28 at 5 pm and live-streamed for the public.